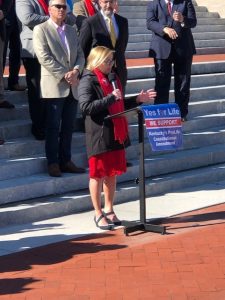 Frankfort KY (April 13, 2022) – Earlier today Kentucky lawmakers voted overwhelmingly to override the veto of the Humanity in Healthcare Act, an omnibus pro-life bill sponsored by Representative Nancy Tate of Brandenburg. The measure, HB 3, is a vital piece of legislation that will ensure Kentucky women and children continue to be treated with dignity and respect.

“I was sent to this legislature to craft legislation that reflects the values of my district and the people of Kentucky, not the Governor. I am disappointed that today’s vote was necessary but appreciate that the Kentucky General Assembly reaffirmed its place as one of the most pro-life, pro-woman, and pro-child legislatures in the nation. The current healthcare environment is hostile to women and children and most especially the infant in the womb. Today we send a clear message that women and the unborn are worthy of protection, and they deserve to be treated with dignity,” said Tate.

The measure also states that physicians must ensure that at least one parent of a minor seeking an abortion is consulted. The minor can petition the court to bypass parental consultation, but the court must find clear and convincing evidence that the minor is mature, that the abortion is in the best interest of the minor, and take precautions to determine if the pregnancy is the result of abuse by the parent or guardian. An exception for medical emergencies is included, but the treating physician must notify the parent or legal guardian within 24 hours.

HB 3 also addresses how fetal remains are treated. The bill would require that parents receive notice of their right to take responsibility or relinquish their child’s remains within 24 hours of the procedure. Under Tate’s proposal, babies’ remains cannot be treated as pathological waste, disposed of as medical waste, or sold.

“In 2019, when Ohio Attorney General Mike DeWine reported findings that Planned Parenthood of Cincinnati was disposing of infant remains in Kentucky, this spurred me to investigate and adopt the language upheld by the U.S. Supreme Court in the 2016 case, which prevents human remains from being treated like medical waste, similar to an extracted appendix,” added Tate.

Another crucial piece to HB 3 is language that would ban abortions after fifteen weeks of pregnancy. According to Tate, this language was added in the event the Supreme Court upholds Mississippi legislation it is currently reviewing as constitutional, putting a pro-life law in place in Kentucky that would not be subject to a good faith legal challenge.

“I am honored to have the opportunity to serve as the Pro-life Caucus Chair for the Kentucky House of Representatives and to be the primary sponsor of HB 3. I will continue to strive, along with the House and Senate Majority, for the protection of women, children, and families regardless of their gestational or chronological age,” added Tate.

The legislation now heads to Secretary of State Michael Adams to be signed into law, as required by the Kentucky Constitution. To view the full piece of legislation, please visit legislature.ky.gov.